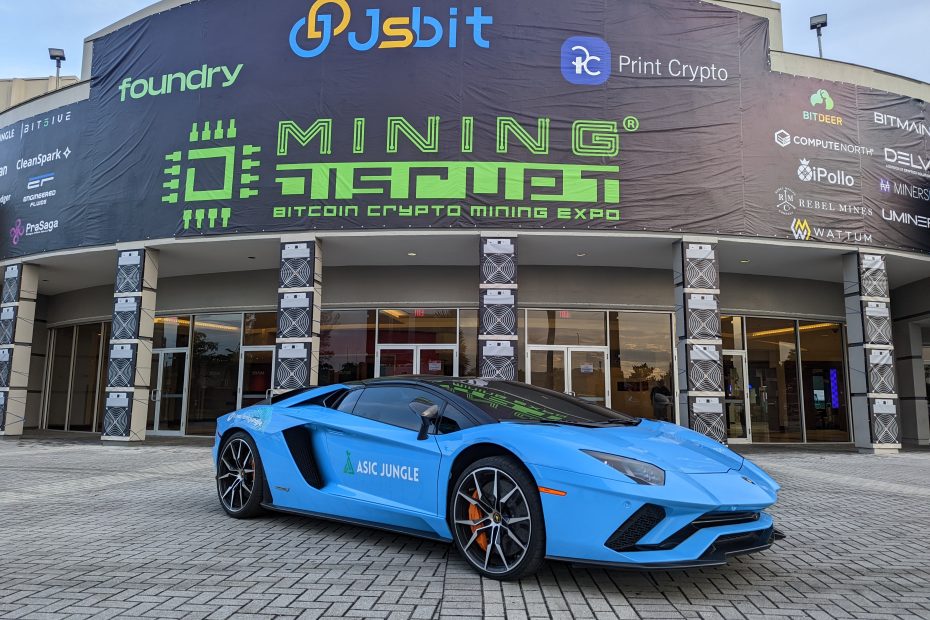 This month’s news letter summarizes five highlights from the recent Mining Disrupt conference. Mining Disrupt was held July 26 through 28 in Miami, FL USA; bringing together nearly 100 exhibitors focused on Bitcoin mining technology and development. The full spectrum of the Bitcoin mining ecosystem could be found in the conference throughout half a million square feet of exhibition space which included two floors of the Miami Airport Convention Center. There were three pass levels, General Admission, VIP, and Whale. The VIP and Whale tickets included perks like free buffet lunches, open bars, and a cigar lounge; making networking and socializing easy and entertaining.

There was also a continuous queue of speakers on the first day, each speaker had roughly 10-minutes to present, which made it difficult to get much needed nuance out of the topics. The second day featured several panels from industry leaders and builders. Overall, the conference organizers seemed to have a heavy focus on the US dollar value of bitcoin; from the Lamborghinis parked out front to the conference introduction video featuring images of private jets, champagne, and repeated mention of the once trillion dollar market cap of Bitcoin. There was a noticeable disconnect between the organizers and the conference exhibitors and guests who seemed to have a more clear focus on Bitcoin’s permissionless, censorship-resistant, and decentralized aspects.

One observation from the overall experience is that there is no shortage of solutions to support expanding Bitcoin mining operations. Some of the companies with the most notably streamlined solutions will be mentioned below, but this is not an exhaustive list. If you’re thinking about getting into Bitcoin mining or expanding your current operations, you have access to better technology and better tailored options right now than at any point previously.

Upstream Data captured the attention of the whole conference at their booth which predominantly displayed a range of products offered to capture stranded methane gas. In oil & gas well operations, the natural methane gas is a byproduct of the process that is typically vented or flared on-site because the costs to install the necessary pipeline infrastructure to bring this byproduct to market is not economical. Through Bitcoin mining however, this naturally occurring byproduct can be used to power a natural gas engine that runs a high-voltage generator, which in-turn powers ASICs. The once wasted energy can now be brought to market through Bitcoin on the oil well site and Upstream Data manufactures a range of packages to help facilitate this:

The new Hash Hut design is roughly the same dimensions as a shipping container and can be as short as 4ft or extended to 20ft in length, the power capacity of the Hash Hut ranges from 90kW to 900kW with each 4ft section capable of handling up to 180kW of load. The symmetrical design brings in fresh filtered intake air from the bottom and exhausts the hot ASIC air from the top. Behind the upward facing exhaust vents are aluminum shutters that close when the ASICs are powered off to prevent weather from entering the work space. When the ASICs are powered on, the force of the exhaust air and the angle of the motorized shutters prevents weather from entering the work space. Each ASIC inside the work space seals up against a pressure barrier that has a back-flow prevention flap, this serves to prevent hot exhaust air from being cycled back in with the cool intake air in the event that one ASIC goes stops hashing.

The Hash Hut Combo features an engine room attached to the ASIC work space, the engines can be spec’d out for a range of power demands. The engine featured in this next video is a Chevy V8 small block natural gas engine attached to a 50kW generator. The ASIC work space on the other side of the wall is designed as one half of the regular Hash Hut symmetrical design. The concept of intake air coming in from the bottom and hot air exhausting out from the top is still the same. Additionally, the Hash Hut Combo features an active exhaust system with a powered fan to assist with the air flow.

Upstream Data’s BlackBox made an appearance alongside the Hush Huts, there were actually two versions on display: the original 28″ BlackBox with room for two ASICs and the new 48″ BlackBox with room for six ASICs. Upstream Data also manufactures a 96″ BlackBox which has room for twelve ASICs. The 48″ and 96″ versions come with Raptor Power Distribution Units (PDU). The BlackBox was designed utilizing a tortuous air path so that the sound is attenuated by as much as 20dB. The same weather resistant construction methods were used in the BlackBox as the Hash Huts, making it an ideal solution to keep the heat and noise from your ASICs outside of your home. The ASICs inside the box are the primary air movers and a pressure barrier separates the cool intake side from the hot exhaust side. In the video below, you can see the new metal pressure barrier that Upstream Data manufactures now. This new pressure barrier also features the same back-flow prevention flaps as the Hash Hut to prevent hot air from circulating back to the intake side in case an ASIC stops hashing.

Upstream Data provides solutions for a range of Bitcoin mining operations of any scale. Whether you’re a home miner looking to run an ASIC or two in your backyard or an oil well operator looking to utilize a wasted resource, you will be able to find a product from Upstream data to get your mining operation off the ground.

Braiins Systems was showing off their proof-of-concept ASIC backpack during the conference. This mining rig featured an S9 Antminer, a battery pack, mobile internet, and a touch screen for the pool interface. In order to save on battery life, the S9 had only one hash board and was underclocked to consume ~200 Watts. Braiins Systems offers a range of services for Bitcoin miners such as operating the newly re-branded Braiins Pool (formerly Slush Pool), BraiinsOS+ firmware, Stratum v2 development, Farm Proxy, and the Mining Insights dashboard. Braiins is building a full stack of solutions as a service provider to Bitcoin miners of all sizes.

Braiins also unveiled their Bitcoin Mining Handbook during the conference. This short but information packed book is the perfect companion for curious miners. A compilation of several short contributions from industry experts, this handbook is well worth the read for practical explanations from those with hands-on experience.

Silex Data Solutions had a prominent booth at Mining Disrupt that featured an immersion tub solution. Immersion technology involves using a dielectric oil to submerse the ASICs in, this oil transfers the heat through liquid instead of through air. Some advantages are that there is no ASIC fan noise, there is no dust getting clogged in the heat-sinks, and you can overclock the ASICs to get more hashrate. Some disadvantages are that there is usually more upfront capital investment. Once the heat is captured in liquid form, it is much easier to control. Many miners are using liquid heat to transfer it through a heat exchanger to another liquid media such as water or glycol. Once the heat is transferred to water or glycol, then it provides a cheap source of hot liquid for making a heated driveway, heating a swimming pool, or other creative uses. There were several immersion related solutions on display at Mining disrupt, although water-cooled mining may be a viable contender in the near future, there seems to be a clear trend favoring the benefits that immersion cooling offers.

Hash House offers several different PDU options ranging from 80A to 250A capacity. Their PDUs feature integrated circuit breakers and several outlets for your ASICs which makes cable management and electrical circuit installation much easier and cleaner. Although PDUs offer value in the form of convenience and cleanliness, be cautious when spec’ing out your Bitcoin mining PDU. Ensure that the entire circuit your PDU is connected to will be able to handle the amount of load you put on it. Consult a licensed electrician where needed. Objectively, Hash House probably had some of the nicest swag of all the exhibitors at the conference.

The Bitcoin Mining Museum, brought to the Mining Disrupt conference by @TheCoinDad, featured a rich history of Bitcoin mining hardware. Some of the earliest specimens in ASIC technology were included, like the 220Gh/s 400W Bitmain S1+ released in 2013. The S1+ had additional heatsinks added to the ASIC chips on the top of the circuit board. These heatsinks were not included on the main production run of the S1.

If you enjoy Bitcoin mining history, you will certainly want to stop by the Bitcoin Mining Museum website to learn more. There are a variety of designs that look familiar to modern day ASICs and there are many that look completely foreign.

Don’t miss next year’s Mining Disrupt if you want to experience the latest advances in Bitcoin mining solutions. This conference was a great networking opportunity where a wide range of industry professionals gathered in one place. No matter what size or scale of Bitcoin mining operation you are working on, you will certainly find some clever solutions at a gathering like Mining Disrupt.