Stronger grids, one ASIC at a time. 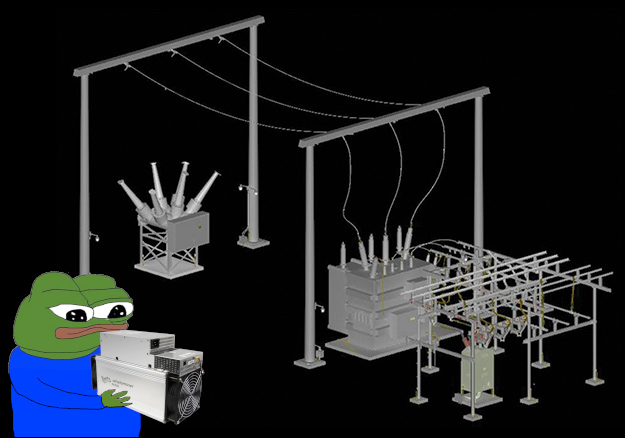 As the saying goes; “use it or lose it”, electricity is a commodity that must be consumed as it is produced. Electrical infrastructure requires constant supply, demand, and maintenance. When there is a break-down in one of those three pillars, the whole system is affected. This month’s news letter focuses on the balance required for healthy electrical infrastructure and how Bitcoin mining solves problems that affect everyone connected to it.

The Merom Generating Station in Merom, Indiana USA is a coal powered energy facility owned by Hoosier Energy, who had plans on decommissioning the facility in 2023. However, at the moment, a deal is being worked out between Hoosier Energy and Hallador Power to transition ownership of the facility. Hallador says that they can operate the facility at a much lower cost. Part of the deal is that Hoosier will continue to purchase 100% of the facility’s capacity (1-GigaWatt) from the new owner, Hallador, through May of 2023. At that time, Hoosier will start gradually reducing the amount of energy they purchase from the new owners to 32% of capacity by 2025.

Hallador has plans to transition the facility from 100% coal to 50% coal and 50% solar. The viability of this coal-to-solar transition will certainly be tested as customers connected to Local Distribution Companies (LDCs) who purchase their power from generating facilities like the Merom Generating Station continue to grow. As the consumer base grows, the expectation and demand for reliable energy sources to provide constant power also grows. Solar energy, although renewable is not reliable; and the more economic activity, essential services, and livelihoods of citizens in Indiana come to depend on that reliable energy, solar may not be up to the task.

Renewable energy sources like solar produce nothing when the sun is not shining. The largest US solar power station is the Solar Star near Rosamond, California. The Solar Star facility has only a 1.6 GigaWatts annual net output, at an expense of covering over 3,200 acres of what was once beautiful wildlife territory and fragile ecosystems of the Mojave Desert. Even if the solar panels are operating at maximum capacity, if the demand is not there to put that energy to use then it is a waste, as the energy can only be transported so far before the effects of transmission loss reduce it to nothing.

While it is true that large battery banks can be leveraged to continue delivering power when the solar panels are not producing energy, this leads to an environmental impact that is arguably worse than using coal. The energy produced from solar panels can be stored in the form of direct current, then converted to alternating current when needed on the grid. However, this utility is not without its own set of tradeoffs. From lead-acid to lithium-ion batteries, either the risk of environmental contamination due to leaks or the process of extracting resources from lithium mines has an impact on the environment that is not seen with coal. Both coal and lithium mines can be in the form of pit mines like in the image of a lithium mine below, however, the concentration of lithium in ore is typically around 0.2%. In other words, producing 1 ton of lithium means removing 500 tons of earth. Large tractor-trailer trucks must haul all this material, all running on fossil fuels. Additionally, the dissolver of choice for removing lithium from the ore is the notoriously corrosive and toxic sulfuric acid. The toxic by-product of this process create a whole other environmental hazard.

If demand spikes on the Merom facility, they can’t make the sun do more shinning nor can they rapidly spin up coal production. Power generation facilities using coal, natural gas, hydro, or nuclear sources need a long time and a lot of resources to spin their capacity up or down. For example, if the Merom facility operates at 90% of its 1 GigaWatt capacity and demand dips to only 700 MegaWatts, then 200 MegaWatts of energy will just evaporate in the form of heat.

This is a challenge every power generation facility faces, it takes an intricate network of fast communication and immediate response to demand changes coordinated between power generation facilities, bulk transmission operators, sub-stations, Retail Energy Suppliers, and Local Distribution Companies. Careful planning and projection goes into calculating near-term expected demands on the grid and being prepared to meet those demands using a variety of energy sources like coal, natural gas, nuclear, hydro, wind, and solar. An over dependence on the less reliable energy sources like wind and solar can have devastating consequences to a grid when the demand out paces the supply.

Retail energy use is typically light and sporadic; dishwashers, washing machines, lights, air conditioning units etc. The demand from these appliances when aggregated from an entire city can add up to a lot. However, the use-time is relatively short and doesn’t occur all at once. If a power generating facility has a majority of retail consumers to depend on for consuming the energy produced on demand, then reacting to fluctuations without causing a lot of wasted production can be very challenging. Consider that an entire city can get home from work, run all their appliances, and then go to sleep before the generating facility has an opportunity to spin up production enough to meet the demand fluctuation that has already come to pass.

One way to help strengthen the grid infrastructure is to ensure a constant base load is present. For example, take the Merom facility operating at 90% of its 1 GigaWatt capacity, and say hypothetically it experiences a dip to only 700 MegaWatts in retail demand but this time there is a 115 MegaWatt base load present. Now only 85 MegaWatts are being lost due to lack of demand during the dip.

This is exactly what Bitcoin mining company, AboutBit LLC out of Kentucky USA, has done. With a 5-year, 115 MegaWatt agreement, AboutBit LLC will be providing a constant base load for the Merom Generating Station. This means that the Merom facility can operate closer to capacity with less wasted energy production. This also means more job security for the ~100 Merom Generating Station employees as well as the coal miners producing the coal for the facility, the railroad workers transporting the coal and maintaining the tracks, the utility workers connecting and maintaining the power transmission infrastructure, and all the other families in Indiana and Kentucky that depend on these connected industries to continue working.

Another benefit is that if there is a retail energy spike, the AboutBit LLC mining facility can shut off the ASICs at a moments notice and free up the 115 MegaWatts of base load they use. Stacy Griggs, AboutBit founder and CEO has committed to providing this flexibility when needed by the Merom community. Then when the demand has gone back to normal or the Merom Generating Station has had a chance to catch up, then the Bitcoin ASICs can be powered back on just as quick.

Hoosiers have it figured out

There was an in depth discussion about this power generating facility on the Upstream Data weekly podcast, B.E.A.S.Ts of Bitcoin, episode 7. One listener, HoosierHodl on Twitter, is actually a Bitcoin miner in Indiana who shares his story about how even his small Bitcoin mining operation has had a massive impact on his local grid infrastructure.

HoosierHodl explains how, like many Bitcoin miners, his journey down the grid infrastructure rabbit hole began with a blown transformer. Bitcoin miners have a knack for exposing weak links in their local power grids, but exposing these weaknesses is key to making the grid as robust as possible. That incident actually put HoosierHodl and the CEO of his local utility company in contact with each other and since that time they have worked together to better understand how a small Bitcoin mining operation in Indiana turned into the second largest consumer in their county over night.

Tune into this episode to hear a real account of how a few Bitcoin ASICs exposed a weakness in the grid, caught the interest of a utility company CEO, got some idle transformer equipment back into service, and encouraged a coal production plant to remain at a higher capacity so the customers downstream remain connected to a more robust and reliable grid.